This year I ‘swapped’ classes to pick up a yr 7 class part way through the year. It has been an interesting challenge, for two reasons. 1) I have not taught yr 7 Science before, and 2) I found it ‘difficult’ to pick up a class when expectations and routines had already been set. It took a while before this class felt like ‘my class’, and that challenged me to think about the concept of ‘ownership’ of a class, and who should meet whos expectations.

Anyways, we have recently starting a topic on microbiology. After a typically energy filled monday lesson (For reasons I am still working on, when I have this class on a Monday they are such a different class to Tuesday. They take longer to settle, are disruptive, noisy, and just a bit off on a Monday compared to a Tuesday. I’m still working on the why, and trying to plan activities to make the most of it) I was a little apprehensive about how Tuesday would go – we were going to build some model bacteria based on what they had learned the day before.

And, to be honest, they blew me away. Absolutely blew me away. I had been convinced the lesson before had been a right off, and no-one had learned anything. But the class could tell be that a baceria had a cell wall, a cell membrane, some had flagella, some had a capsule, all the ‘stuff in the middle’ (DNA) and that funny c word (cytoplasm). So, despite the noise, and the seemingly off task carry on the day before, they had still mostly achieved the learning objectives around knowing what the parts of a bacteria were, and what they did.

And they made some fabulous model bacteria displaying these features, and as I went about the room we had some excellent discussions about what the different bits did. 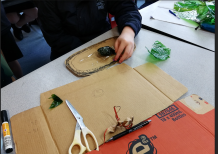 So it was a really good reminder for me that, even though I know learning doesn’t need to be quiet or tidy, that in this case the students did really did learn while being noisy and slightly outrageous. And that many of them really enjoyed the chance to be creative and collaborative, rather than doing a work sheet or a computer animation. That even though I didn’t think they had listened, they had, and had taken on board the key points.