It is almost a month (where does time go) since I posted about the start of our digital technologies module, and as it finished tomorrow I thought I should remind myself and share how it has gone. It certainly has been a bit of a wobbly path the last couple of weeks, not helped by us being newbies to modules and getting the finishing dates wrong! But we were gained a week, rather than losing a week, so this meant we got to give Minecraft Education Edition a go, as well as doing some hour of code and doing some super cool projects on the microbits. All and all, I think the students have enjoyed it, I certainly have, and I have learned loads :). We have already started making plans for a digital technologies module for yr 8, and how it might look through into yr 9 and 10…. very exciting. Hopefully we can find a way to carry it on right up through the school, and to integrate the ideas more into all subjects rather than being stand alone. But that is a discussion for another post!!

So, we had just finished up with some basic commands on the microbits, covering ACSII codes and binary when I last blogged. Due to some technical issues getting minecraft to work, we segwayed into using the Hour of Code minecraft tutorials. I was not quite prepared for how much the students would enjoy this. But they really did, and it was a great follow on from the simple coding we had done of the microbits.

In 3-4 lessons, most students finished all of the minecraft tutorials, which reinforced programming tools such as loops, and introduced more complex ideas like functions. Once students had completed each tutorial, they could insert their certificate into their onenote pages to let us know what they had gotten up to.

A really important part of these three lessons was students using trial and error to build their code. Because there is the visual representation right there on screen, it is easy to see where the code went wrong. It is not always easy to fix it!! But Kevin and I tried really hard to make sure we encouraged kids to try things, and then fix them – could they work out where they had gone wrong? What else could they try? What had someone else done that worked?

Then the class had an hour to do an hour of code of their choice, most choosing the starwars option, but some chose frozen (which has come lovely maths/numeracy links) and other made an angry birds game.

We then went back to the microbits and set a couple of challenges (Kevin set the challenges, and I struggled to do some of them too…..) The first was could the students make their microbit keep score in a rugby game? This involved using the buttons on the microbit so explored in more depth the idea of inputs.

The next challenge was could we make the microbit do a times table. I REALLY struggled with this one, and was ‘accused’ of writing ‘ugly code’ by Kevin (in a tongue and cheek kind of way) But this was because I ‘forced’ the microbit to show all the 2 times tables one after the other, instead of using a button press. Some students used functions, but then I also learned that making the code too complicated in this way creates problems too. So it was a great lesson for me about keeping things simple without writing things down over and over and over.

Some different examples of students code from their onenote portfolios – some are ‘prettier’ than others. It was a challenging task, but it allowed for a lot of extension for those that wanted to:)

We then had a play with some speakers on the microbits. I think this my favourite, although some of the tunes got old pretty quick. But the students LOVED the sounds, the more annoying the better. Thankfully the speakers were very quiet.

The snow globe was a great idea, students loved making these and making their own patterns, and then adding tunes to go with them. Which was a nice ‘friendly’ extension for less confident students.

Some of the more able kids completed the ‘hard’ challenge on the first day, and then went further….

So these @microbit_edu can play a game…. Next step get another one to keep score #edchatnz #MicrosoftEDU @noisyteacher @cathyquigan pic.twitter.com/dC4HJIWcGA

and then still further. Which then also dragged other students along as they wanted to replicate what they were seeing.

We then figured out that we had a bonus week, so we put in a BIG effort on the night of parent teacher interviews to update all the laptops in between interviews. It meant that there was finally a class set of laptops that had minecraft EDU on them, and the students were delighted.

It also meant that I got to properly try the code builder, and the pre built world is PERFECT for what we need to do, especially for the first time. As I get more confident I might tweak it or build our own challenges (or get kids to build it with me, or to show me how really…) that maybe replicate more closely something from their lives. For example, rather than getting an agent through a maze, can you get a yr 7 student to the canteen for a juicie!!

So for our first crack, I think it went pretty well. Student feedback indicated they had enjoyed the course, learned some things and they gave us some ideas for what we can do next time. 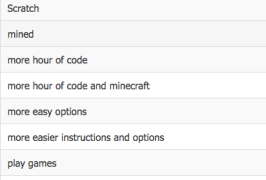 A few asked for easier instructions, and so I’m working on putting together some screen shots and instructions to go into the onenote so if students are lost they can refer back to it. And most didn’t enjoy learning about binary/bits, even though I thought we aced this part of the course. I guess we could have worded the question differently…. but we will still have a think for the next module.

Remembering back to my surprise at the lack of typing skills the students had, I think it is important to integrate the skills we want students to have into the programs. So hopefully this module has set the students up to be able to email, insert pictures etc, and therefore help them be more confident using technology in other subject areas, and help other students to so to.

So overall, I think for a first go, Kevin and I did a pretty good job of our first digital technology module and our first crack at co-teaching. We did put a lot of effort in, but the next modules will be easier as we tweak and refine and work out exactly how it works for us. I am looking forward to making my code prettier, and getting more stuck into the code connection for minecraft education in the next module. Bring it

2 thoughts on “Finishing off digital technologies… till we start again next week :)”