Every year as part of my Genetics topic I set aside a couple of hours to talk about morals, ethics and ethical frameworks. I am still using an awesome outline I got from a session at Biolive in 2009 that Fiona Anderson presented that uses some great resources from the Science learning hub Ethical analysis page. I ask my students to try and think past there ideas of ‘right and wrong’ and identify why they think so. Yesterday was the first time I got asked

‘Why are we doing this in Science Miss? Isn’t this social studies?’

Which was both a great teachable moment around science and ethics, and a little bit of a downer that somehow throughout the year I hadn’t made an impact on to why ethics might be important for Science. That said, you do need a relationship with the class so it is a safe space for students to ask questions and share ideas – you can end up talking about some fairly heavy stuff.

So I thought I’d share how I approach the ethics ‘lesson’ and I need to keep pondering where else I could include ethics.

So, as I mentioned, I still follow most of the ideas from the presentation from Fiona in 2009. (The slides were shared at the time, so I hope Fiona doesn’t mind me sharing the presentation now – the links are from the old biotech learning hub that have moved to the Science learning hub – link are smattered down below)

Essentially, you identify what bio ethics and ethics is first up

Then distinguish between morals and ethics – there is a explanation video HERE on the science learning hub.

I also tell a personal story of when I was working in research, and, without thinking, when my flatmate asked how my day was when we were at the supermarket and I casually replied I’d had a nightmare day because I’d ‘processed’ 150 odd mice, I got ‘attacked’ by a person who overheard and screamed that I was a monster for a good 5 minutes. She and I had very different morals around animal testing. I just tried to diffuse and ignore their leather shoes…. sigh.

And in responses to the ‘why are we doing this in Science question’?, I talked about Mengele and some of the horrific experiments during the Holocaust. And how just because ‘Science’ can, doesn’t mean ‘Science’ should. And how I thought Genetics was a relevant topic to discuss there issues, as genetic screening and IVF techniques become more advances and common place, society as a whole needs to be aware and educated so informed choices can be made.

For my class yesterday, I asked them about the ‘anti smacking law’ (which possibly lead to the social studies question….) as I knew it was something they would all have an instantly moral feeling about – but when I asked them why they thought that, or felt that way, they had a hard time explaining it to me….. we spent about 10 minutes talking through some of these ideas, and of course they all come up with questionable moral and ethical situations in order to ‘trick’ each other. But I have asked with different class and students about euthansia, ‘paying’ for addiction treatments or should the youth wage be less than or the same as the minimum wage.

I then called them back, and spent some time talking about ethical frameworks…. Video HERE 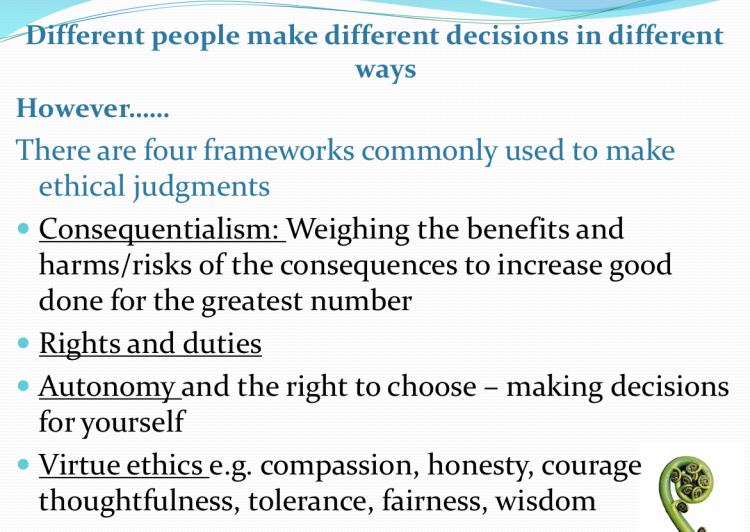 And then we watched the example of the ethics of whaling, and how you can apply these ethical frameworks to decision making.

And then they class had definitely had enough of me, so I put them into groups, gave them a framework to work with and gave them a task of deciding if we should screen ALL embryos for susceptibility to cancers. (You can have ‘real’ fun with the groups if you like…. in another year I asked about vegetarian versus omnivore diets and put some ‘farmers’ in the values group….) (I thought about vaccinations – should ‘we’ pay for the treatment of some-one who is really sick because they didn’t get vaccinated, but I’ve already had a couple of vaccine debates with this class this year)

And of course, ‘chaos’ ensues. Mostly that awesomely good chaos as students argue, talk over each other, go hang on, I need to look that up…. what do you think?

I LOVE talking about ethics with my classes. It really stretches there thinking. It allows ‘non science’ kids a chance to shine and fully participate. It always opens my mind up to different ideas and morals. It is a great chance to bring up historical cases, or talk about the ethics proposal systems in NZ (it is a rigorous process to gain permission for animal experiments for example, and research can’t be published unless ethical approval was obtained. And students are often quite interested that ethics doesn’t extended to insects….). But can I fit it anywhere other then Biology? Even the story of Rosalind Franklin and the use of her work ties in with DNA. I touch on it with the story of Alexis St Martin who became a living experiment on the digestive tract – and how his family ‘hid’ his body when he died so it couldn’t be used for further research. But I’m not sure how it could fit into Chemistry, or physics quite the same? Maybe around ideas of space travel? Was sending the dogs and primates into space ethical? Or climate change – is it ethical for people to allow building new building consents for ‘water front properties?