Today I had a mentally crushing realisation of just how far short I have fallen for a goal I set for myself and my yr 13 Chemistry class. I had set out to teach Chemistry, to move away from teaching them to the Achievements Standards. I hoped to make them interested in Chemistry and the world about them, not just the credits. And I am pretty sure that I failed quite horribly at it. We had a end of topic test last week required for the ‘derived grade’ demands of NCEA and they kids just didn’t do it. Some flat out refused. The ones that did do it did terribly for the most part. When I raved and stormed today trying to get something, anything, out of them that I could do to help, I got ‘I’ve already got Merit endorsed, I don’t need this….’ or ‘I’m not doing this standard in the externals, I don’t need it…..’ or (the worst for the soul today) ‘I’ll just swot up for the exams Miss’. Or averted eyes as they thought to themselves ‘another teacher flying off the handle’.

From an outside perspective, the ‘results’ this class will get will be awesome. A good number of endorsements should be on the cards. They have learned some Chemistry. These kids will put the work in for the exam and pass. The feedback from the internally assessed standards was positive – kids did think offering the 4th internal would be good ‘for more credits’. Apart from today when I was ranty, I think most of them enjoyed the class. They gave useful feedback for next year. We did some great practicals and I feel I got them thinking more about what those practicals represent. Some might be in a place where they can even do well in Chemistry next year at uni.

But from my perspective I had wanted sooooo much more for them. I talked with them at the start of the year and tried to blend their need for credits and uni prep (this is what they said they wanted) with me wanting to push those preconceptions.

I wanted them to be motivated and challenged, not counting credits. I wanted them to be able to at least get an achieved on a practice test without having to ‘cram’ because they had a base level of knowledge from throughout the year. I wanted them to have more pride in themselves and their work, and so put the time in to learning something. I had faith that trying to instil the value for a love of learning would hold out over the credit crunch.

Maybe do I need to rethink. They said they wanted credits and uni prep. Do I really know better than they do about what they want?

So I will crawl into a swirl of thought, and try and think about how I could do better next time. But right now it hurts and I am so frustrated that in the end it still all came back to credits. Credits they will get, but at what cost?

So, today I arrived at school (the day after the post and ‘incident’ above) and found my room pranked. With clever ‘political’ memes based on conversations around elections time. Maybe, just maybe, I was too hard on the kids (and myself) and they learned more than just about credits…  🙂 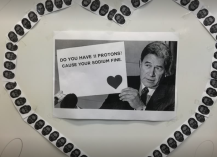